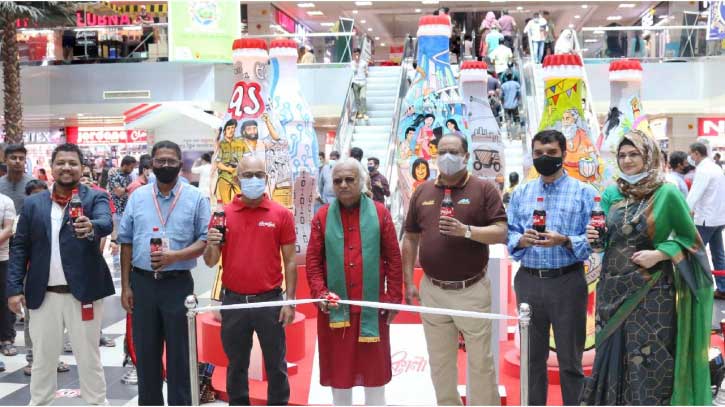 Soft drink company Coca-Cola Bangladesh is celebrating the 50th anniversary of Bangladesh on its independence. The company is launching Coca-Cola cans and 500ml coke bottle with 6 different design describing remarkable Bangladesh. These special cans and labels carrying the impression of the celebration will be in the market from March to December this year.

The program was held at Bashundhara City Shopping Complex in Dhaka. Manoranjan Ghoshal, Shadin Bnagla Betar Kendra Artist and chief guest has unveiled six large-sized replica Coke-bottles with the independence designs. At the same time, Coca-Cola also launched a digital campaign under the slogan ‘From the World to Bangladesh’.

Six replica bottles of Coke represent Bangladesh with different themes. These are ‘Earning Victory and Freedom through Bloody War’, ‘Country’s Prosperous Industry and Culture’, ‘Digital and Technological Advancement’, ‘Women’s Empowerment and Socio-Economic Advancement’, ‘ Infrastructural development ‘and ‘wish for the prosperity of Bangladesh in future’.

On this occasion, Coca-Cola Bangladesh wishes Bangladesh a happy 50th anniversary of its independence. The head of Coca-Cola says, ‘Coca-Cola is saluting the martyrs of the liberation war on the golden jubilee of independence. That victory brought us the economic freedom and greater opportunities for the development of millions of people. Coca-Cola.

How to dress in 40s: Dressings style that complement your middle age