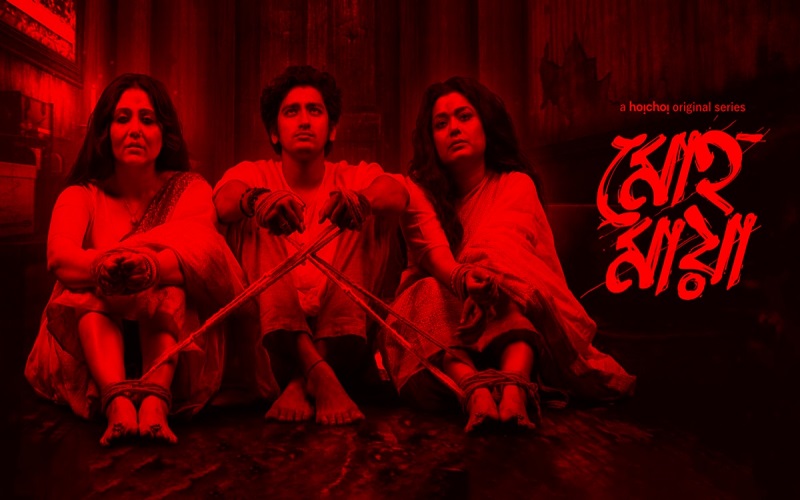 Hoichoi the OTT platform of India has launched its psychological thriller series ‘Moho- Maya’. This 5-episode series has gained huge reaction from the audience. People are sharing their reaction on social media. Like always, many have succeeded to get engaged and other have critically raised questions. What ever your reaction will be, the poster and the cast have the ability to drag you to the screen to watch this series. Director Kamaleshwar’s web series Moh-Mayar has Swastika Mukherjee and Ananya Chatterjee. Both the actress seem completely different in the teaser.

The story portraits Aruna’s family, who has two sons and one daughter. After elder son, when younger son Mickey also leaves home for study in Canada, Aruna feels lonely. To fill up the silent in the house they allow Hrishi to live with them as paying guest. Hrishi is Mickey’s childhood friend and an orphan. To see Hrishi missing his mother all the time, generally Aruna starts to get attached towards him as her new son. But she was unaware of the dark past of Hrishi.

In the childhood Hrishi discovers his father to torture her mother brutely. He also witnesses his father’s abnormal sexual desire upon his mother. From then he adopts a vulnerable perception of attraction and mother figure. Seeing her mother becoming mentally unstable from years of torture Hrishi decides to tie up his mother. But one day she commits suicide. Trying all his life hard to not become like father, Hrishi eventually deal situation with same aggression.

To keep the mother figure Aruna happy he doesn’t fear to take life. Though his suspicious behavior creates doubts in Aruna’s husband’s mind. But Aruna never paid attention to his new son Hrishi. In 1st season we see all his haunting childhood, his dead mother as his imagination, blood, death and suspense. Compare to other web series it might seems to take more time than it requires. But it can be breath taking for thriller lovers also. I’m sure the suspense is quite enough to make viewers awaited for next season.

Criticisms are your opportunities, accept it with Grace