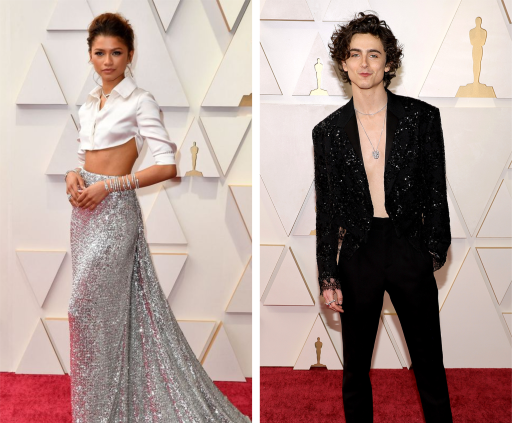 This year’s Academy Awards just ended and we are all star struck from the red carpet of the Oscars. One of the most important nights for cinema is also one of the most important nights for fashion lovers. As most of the celebrities cleanup for this particular event dazzling in outfits created by the big names of the fashion industry. Here are some of our favorite looks from the night.

The Oscar winning Eilish brought all the goth glamour to the red carpet. She wore a beautifully designed puffy black gown quite dramatic I must say. Her out for the night was designed by Gucci. She also wore Fred Leighton jewelry that complemented her dress very well.

The batman actress went for a more subtle pink look this time around. Her Saint Laurent gown was simple and minimalistic with noticeable details. He wore jewelry by Kwiat to go with her look.

Zendaya has been smashing each and every red carpet look recently and she didn’t disappoint at the Oscars. Her Valentino haute couture was custom designed just for her. This look was a great contrast between casual and glamour. She had a cropped white shirt with a shimmery mermaid skirt. The whole look was quite unique and experimental.

If anyone knows how to break the stereotypical dress code its Kristen Stewart. Instead of shimmery fairytale ball gowns she went for the complete opposite. She wore this beautifully funky Chanel suit and had shorts to highlight all that leg action.

Chalamet is among the red carpet favorite. Compared to his other male counterparts his style is very experimental. For instance in this Oscar he chose an out from Louis Vuitton‘s womenswear collection. But he pulled it off perfectly. He wore a shimmery jacket with plain black trousers and shoes styled with silver jewelry.

Ariana Debose just dazzled in her bold red custom made Valentino haute couture outfit. It was a beautiful mix between a pantsuit and a ball gown. She also wore silver De Beers jewelry and an Omega watch to go with it.

The stunner Nicole Kidman wore a beautiful blue gown designed by Giorgio Armani Prive. Her semi-fitted silk gown also had nice puffy details below the waist line. It also had a elegant sleek tail with it. Over all she looked like a dream.

Lupita just glowed in her bold golden glittery Prada gown. The details of the dress was exquisite. The dramatic hairdo with the shimmery gown was hard to miss. Making it one of out favorites from the night.

The Academy awards has one of the most star filled red carpet ceremonies of all times. We weren’t able to cover all of them. These were some of our celebrity favorites from the event.

"But love will make you do crazy things," says Will Smith at his Oscar acceptance speech

The way I went from reader to writer