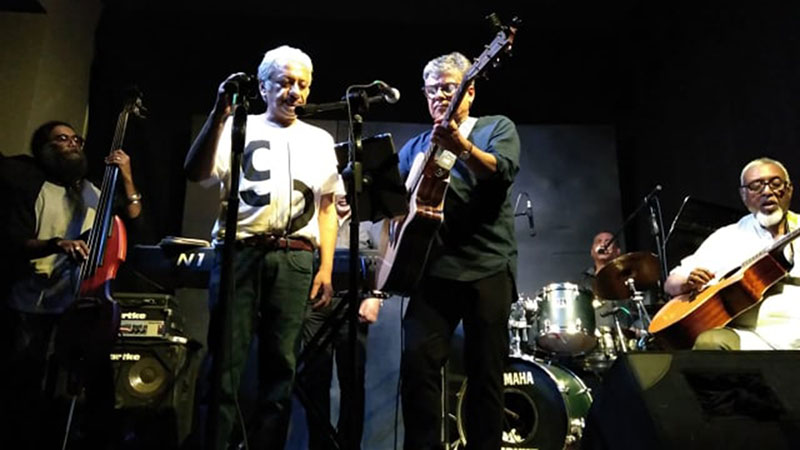 Popular Bangladeshi band Renaissance is coming to create magic again with their new album. After 14 long years of interval, this soft rock band has new for their fans. The name of the album is yet to be decide. But with band’s original lyrics and tunes, near about 10 new songs will be in it.

The band started recording their fifth album at Bappa Mazumder’s studio. Composer Nakib Khan said they had composed 16 songs but not sure how many of them will be included in the album. No specific date has been said but Nakib hopes to release the album this year.

To answers the question of why this 14 years of gap, Nakib khan says that they are very much selective about the quality of the songs which requires time. Besides all the members had to make time among their busy professions. Pilu Khan, who lives in Malaysia has come all the way to work on the album.

Renaissance was formed in 1985 with dedicated musicians Nakib Khan, Pilu Khan, Rezaur Rahman, Imran Rahman, Kazi Hablu and Kartik. The ‘Mon shudhu mon chhuyechhe’ composer Nakib Khan formed the band after he leaves ‘Souls’ band. Now the members are bit older and involved in various professions. But the passion for music is evergreen.

The band adopted laidback music style in instrumental. The trend is to blend eastern melodies with original Bengali music. Both their Bangla originals and Anglo-American cover songs were popular to perform in stages.

After three years from formation, Renaissance first release their self-titled album in 1988. That was a huge buzz for every music lover of the time.  Songs like, ‘keno manushgulo amon hoy’ ‘Bhalo lage’, ‘Hridoy kadamati’ gained the group nationwide popularity. Then came ‘Third World’ in 1993, 71’s Renaissance’ in 1988 and “Ekush Shotoke Renaissance’ in 2004.

Ekush Shatake Renaissance’s Tumi ki aaj bandhu, Hey Bangladesh, Koto je path ghure ghure are still recalled by the fans. It was a fantastic experiment to blend brass instruments into Bangla melodies. This brought a new dimension to the Bangla band’s music. As a result, the album was awarded as ‘Best Band Album of the Year 2004’ by CityCell-Channel I Music Award.

Folding Drones are the ‘New Normal’ for the Holidays