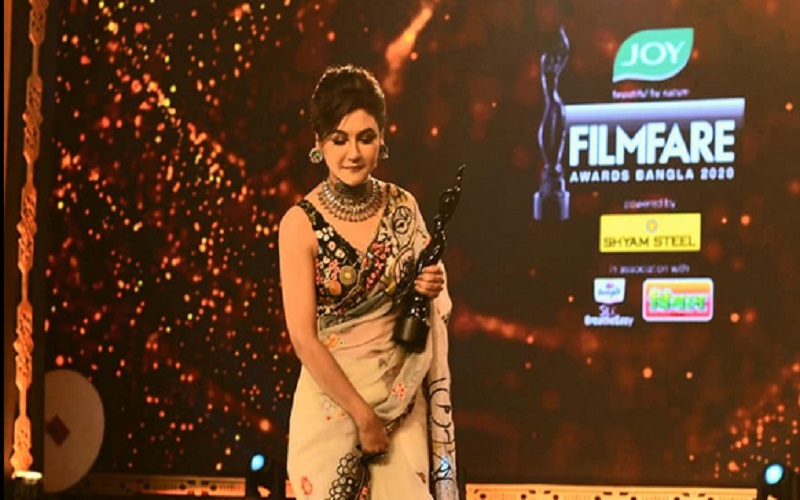 I call this talented actress the one-man army. She has made her own way to success and have become one of the inspirational personalities of Bangladesh. Starting her journey from drama she has now become an international actress to won prestigious award like Filmfare. Yes, you guess it right. I’m talking about iconic Jaya Ahsan, who has won the recent 4th Joy Filmfare Awards Bangla 2021. The occasion was hold at Westin, Kolkata.

She has been awarded in Best Actress (Critics) category for both her films “Bijoya” and “Robibar”. Jaya had previously won the Best Actress award in the 2018 for “Bishorjon”, which was prequel of Bijoya. Joya was running the race with Ishaa Saha (Sweater), Raima Sen (Tarikh), Subhashree Ganguly (Parinita) and Sohini Sarkar (Vinci Da). Leaving all these admiring characters, Joya’s phenomenal acting skill succeed to impress the jury board and took the award home.

On her FB post the actress wrote “Honored and overwhelmed to receive the Best Actress award (Critics) in Filmfare Award East 2020 for the films Bijoya and Robibaar. The victory belongs to the entire team. Sincere thanks to the Jury for honoring me with this prestigious award and Thank you my audience for loving me always.”

Not only her films, Joya’s appearance has also dragged the limelight on her. For the occasion she wore the sari designed by Nighat Imam. Her makeup was done by Abhijit Paul. Flaunting her style attitude, undoubtedly Joya is now on the list of fashion guru to follow for many.

What a combination of talent, beauty and attitude! Her down to earth personality and passion for work has made Joya today’s ‘The Joya Ahsan’. We wish her every success in her life. Hope that she will keep making Bangladesh proud and achieve her ambitious dream.

Do you know water intake affects our brain function?

Jennifer Lopez- Nailing Birthday Outfits And Look Of The Day

Newcomers in Bollywood: Who are coming to rock in 2021?